During the world’s COVID isolation, wild and seldom-seen creatures have been returning to suburban streets, parks and beaches, and it appears the Central Coast is no exception.

Cunningly disguised with algae fronds washed up in a recent storm, a woolly mammoth has recently been spotted, posing as a sculpture-like creature from the Cockrone Lagoon. Or so it seems, until you talk to artist, Pete Rush, whose driftwood and seaweed sculptures have been drawing enthralled onlookers along Central Coast beaches since the early days of our COVID isolation.

First came a horse sculpture on Wamberal beach, the result of Pete picking up some dried palm that looked enticingly like a horse’s tail.

‘I then went looking for the rest of him,’ says Pete, a professional illustrator, screenwriter and advertising writer who moved to the coast just six months ago. ‘I just thought a beach sculpture would be something nice to do for people to look at during COVID.’

That first sculpture led to a pelican at the foot of the Skillion ‘It washed away pretty quickly,’ he says. ‘But I started to get requests for commissions for garden sculptures, especially for beachside properties, so that was interesting.’

‘Then for ANZAC Day I thought it would be appropriate to create a riderless horse, symbolic of the brave who had to be absent from commemoration ceremonies this year.’ It stood near the lagoon on Avoca Beach, a red poppy in its mane and head slightly bowed, paying homage before a slouch hat that rested on a ‘rifle’.

‘People were very respectful of it, and it became a wonderful little war memorial in its own right. And when it finally washed into the lagoon, I saw it lying there in the water — like a dead horse — and I felt that was an even more poignant ANZAC memorial.’

‘Birds are my particular favourite,’ says Pete. ‘I was interested in bird taxidermy as a kid in New Zealand and it helped me understand their skeletal structure, and I think that’s why I feel so comfortable working in 3D. I’ve always drawn birds and animals, and I usually work on a sketch for the sculpture first, and figure out how it will balance and how it is anchored into the sand.’

Pete’s next driftwood project was an emu strolling on Avoca Beach — quite a surprise to a number of beachfront residents on its first morning.

‘I try to place my sculptures where they photograph well in the landscape, perhaps with a sunrise behind them, or reflections in nearby water,’ he says. ‘But they also need to be where there is driftwood and seaweed. Common brown algae is great to work with because it dries over a couple of days and shrinks onto the frame, becoming so hard you can’t even cut it with a Stanley knife.’

Then came the woolly mammoth on Copacabana Beach that lasted until the lagoon, running into the sea, eroded the sandbank and the mammoth toppled into extinction once more.

‘I quite like the temporary nature of these sculptures,’ says Pete. ‘Although people keep asking me how I can bear to see them washed away, the artist in me only sees the imperfections so I’m actually relieved when nature’s hand intervenes, and I can get on with the next idea.’

Over the June long weekend, Pete created a kangaroo on Avoca Beach, signifying the bounce-back of the Central Coast post-COVID. It was a sentiment that not only drew visitors to the beach, but was shared by many tens of thousands of people on Instagram and Facebook!

Pete’s love of birds inspired him to create a flying swan on the mudflats of Avoca lagoon where local bush regeneration work has provided an abundance of cut vines for him to work with. And although he was hoping for higher tidal water to create a reflection of the swan, more seaweed birds seem to be flocking to the area. A sea eagle swoops low over the water, and a very large Dromornis, Australia’s largest flightless bird, has also mysteriously appeared by the Cockrone Lagoon on Copacabana beach … brought back from extinction for a fleeting moment in time. THE GOOD, THE BAD, THE UGLY … AND THE CONTROVERSIAL 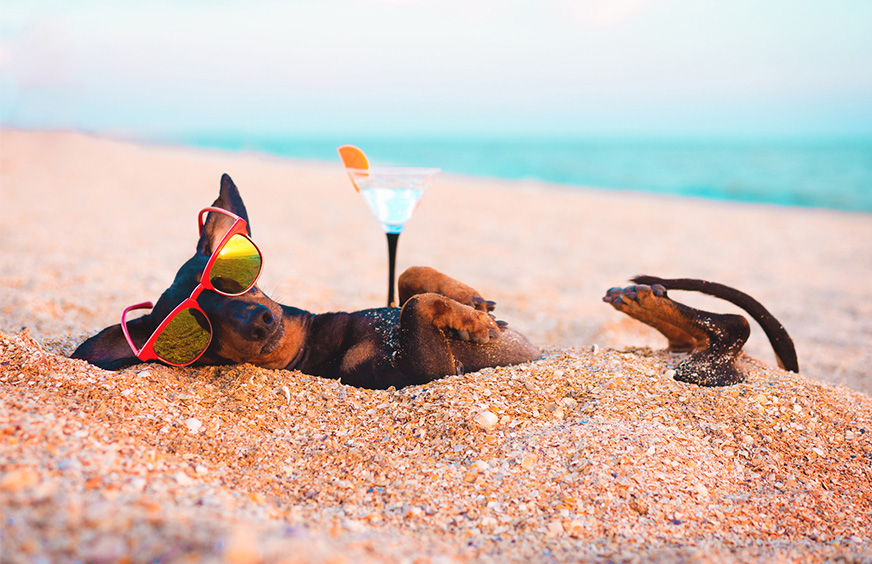 COASTING ALONG … with Libby Greig

It all started with ‘Dry July’